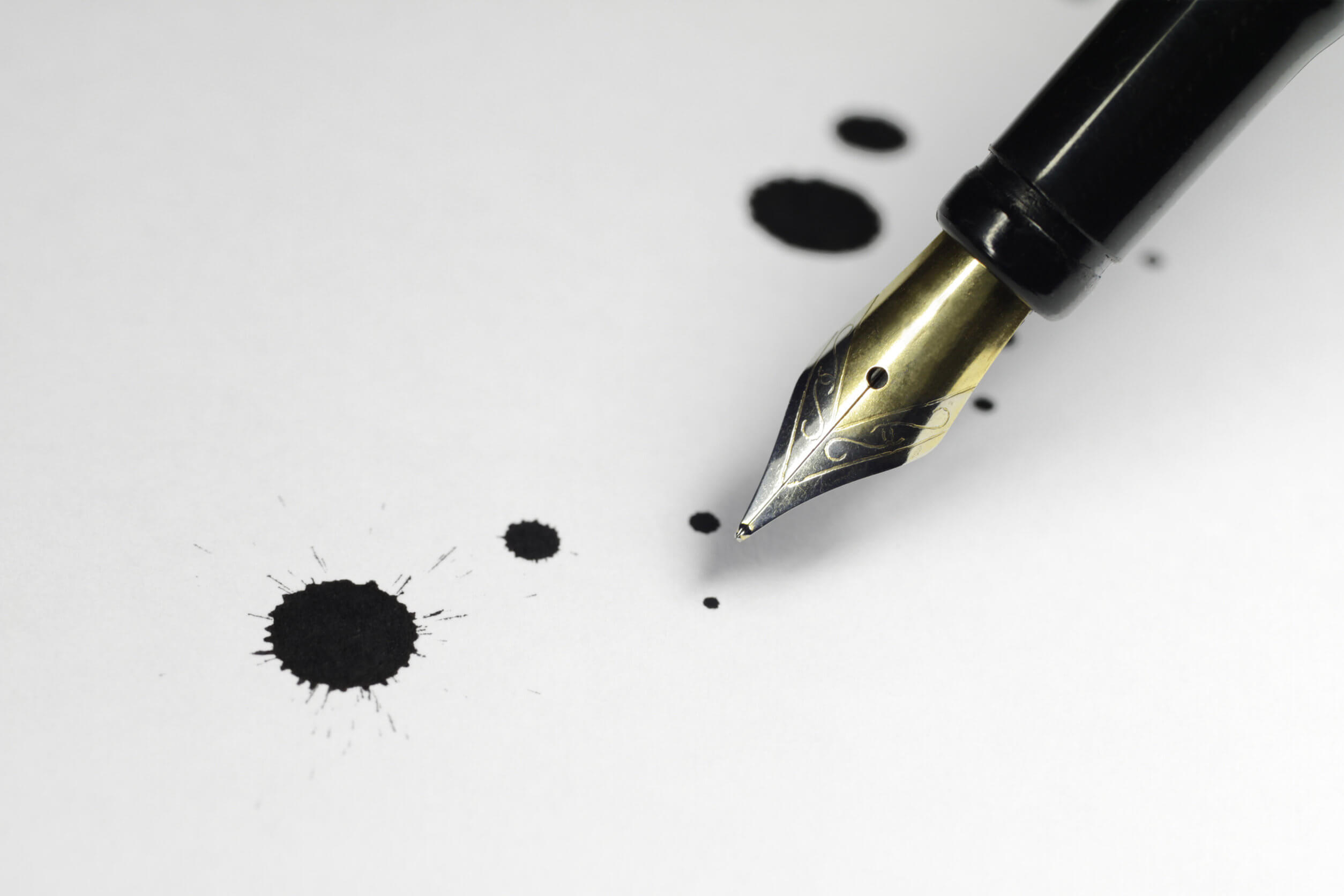 It’s a scenario you may find familiar: you have an important document to sign and you need your trusty fountain pen. But you’ve not used it for a while and it’s dry, although you’re sure you replaced the ink cartridge the last time. Does fountain pen ink evaporate? Or do you have the ghost of a prolific author in the house?

Don’t worry! Nobody’s using your pen without your knowledge. Fountain pen ink does indeed evaporate, even when it’s inside the pen with the cap on. And it’s not good to leave fountain pens full of ink if they won’t be used for a while. Let’s explore some good fountain pen practice.

While there’s a magical feeling to writing with a beautiful fountain pen, the components used are very simple: pen, and ink. Ink is just water that’s heavily dyed and, as we know from science class, water evaporates quickly.

In fact, if a fountain pen goes unused for just a few days, by the time you return to it, it’ll be dry. Even when the cap of the pen is clipped or screwed on, there’s still enough air circulating to allow for the ink to evaporate.

But the dye or pigment inside the ink is heavier than the water and won’t evaporate. Instead, it stays behind, dried out, and the tiny solute crystals can then clog the pen.

That’s why fountain pens take more care than a regular pen if they’re to be kept in premium writing condition.

How Long Can Ink Stay in a Fountain Pen?

For those of us who use our fountain pens daily or thereabouts, there’s little chance that the ink stays in there long enough to evaporate! Writing with ink may be one of the oldest ways in the world to scribe, but it also feels the most luxurious, the most satisfying.

But if you’re putting your pen down for a while and won’t be using it, then it’s a good idea to remove the ink cartridge altogether until you return.

This is because the ink can evaporate from a pen within a few days, and it will be completely dry within a few weeks. This can depend on several factors.

What Kind of Ink are You Using?

The higher the quality of ink, the more pigment is used, and the less it’s watered down. Ink with a high volume of water will naturally evaporate more quickly. So, you may find that getting better quality ink will mean more chance of there being ink in the pen when you return.

The greater the surface area, the faster water will evaporate. This isn’t news. And it even applies to tiny areas like pen nibs. The finer the pen nib, the less air will be getting into the pen, so the slower the rate of evaporation.

But, for those of us who like a nice broad, or even double-broad nib, the ink will evaporate much more quickly.

Does Fountain Pen Ink Evaporate from a Piston Converter?

An alternative (and more environmentally friendly) way of refilling your fountain pen is the use of a piston converter. They come in all shapes and sizes, but the theory is the same: dip the pen or the converter into an inkwell, draw up the ink, and off you go.

Ink from bottles and inkwells, unopened, can last upwards of 50 years. Once they’ve been opened, the quality of the ink begins to deteriorate, even with the cap tightly sealed. So, use it as soon as you can so that you’re writing with premium quality ink.

Converters also seal the ink in better, so even though it will eventually evaporate from the pen, it will do so at a rate much slower than that of a cartridge. For this reason, converter pens can be left longer than a regular cartridge fountain pen, but the result is the same: ink evaporates!

If You Won’t Use the Pen for a While

We can all go through phases of not using our fountain pens for a while. Writer’s block, a hiatus from work, or even a long vacation are all reasons to put the pen down and do other things.

When you return to work, though, you’ll want to get back to using your pen to its full capacity. In this case, do the preparation beforehand.

If you’re not going to use the pen for a while, remove the ink cartridge and gently clean the pen according to that model’s specific instructions. This will prevent dried ink from clogging up the nib.

In the meantime, one way to get a little more time out of the pen without the ink evaporating could be to store it in a Tupperware container that’s tightly closed. The ink will still evaporate, but at a much slower rate, giving you a few more days of precious ink time!

Carefully looking after your fountain pen and knowing how best to refill it will mean many more years of beautiful, productive use.