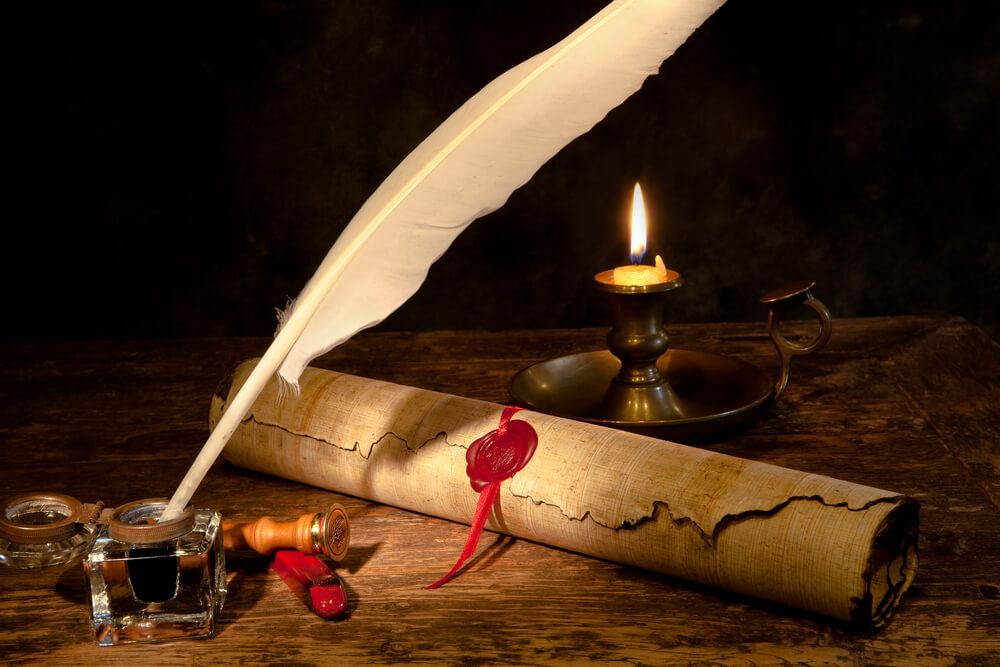 Quill pens enjoy the title of being the longest-used ink-based technology in the history of mankind. Since their inception in the 6th century, quill pens were the dominant writing instrument up until the 19th century.

While the hollow section of the feather pen was initially the primary source of ink delivery—a writer would simply dip the pen in an ink bottle, pushing ink up into that hollow section—it soon evolved into what fountain pen enthusiasts would recognize as a fountain pen, or something very similar.

Because a feather’s composition isn’t designed for long-term use, it would often break at the point of the quill—the nib—and it would have to be reshaped and cut. This is why quill pens are essentially fountain pens, the natural portion of the quill replaced with the same nib that you find in a fountain pen.

What Makes a Good Quill Pen?

Quill pens are often sold at a very low price and, despite the flair and glamorous pictures, many of these pens are a sham and the manufacturers can get away with it because a quill pen today doesn’t hold to the same manufacturing standards as some of the best executive and fountain pens available.

That doesn’t mean that there aren’t good quill pens out there, however, you just have to be more cautious of what you want to jump into. Quill pens are generally affordable, which makes it even more difficult to separate the wheat from the chaff. Here are some of the things you should keep an eye out for:

Handcrafted quills are a better variety than anything hastily assembled on a line. This makes every quill pen unique, so regardless of how many you buy in a series, set, or model, each one will be perfectly unique.

The construction of the nib should be stainless steel or gold. Anything using a different type of metal is likely to be a ripoff. Remember, quills nowadays primarily use the same type of nib that fountain pens use, so should the nib on your quill be anything less than those?

Feather type is important as well. Quill pens are extremely light, which can be very disconcerting for someone attempting to write with a quill for the very first time.

In America, the feathers that are used in quills are typically turkey feathers because they are large feathers and off a decent amount of counterbalance to your pen strokes. If not using turkey feathers, then it should come from a large avian. Never trust in a quill whose claim to fame is that it has a cardinal feather.

Whether for good or ill, most feathers that you will find on quill pens today are not even real feathers but manufactured. Whether that is because of environmental concerns or because it is cheaper is hard to say.

With a quill pen, the capillary—or hollow section that runs straight down the middle of the feather—was the primary container and facilitator of ink. Much of that has changed now and the refilling process is identical to fountain pens in most instances.

Most share their features with a fountain pen but still use the old-school method of dipping the entire nib in the ink, wiping the nib clean, and writing until the ink is depleted before repeating the process.

There are some options out there where you will find a feather quill that refills similarly to a fountain pen or a gel-tipped pen, but they are few and far between. For the most part, you will dip your nib into the ink and write, just like in the old days.

Since most quill pens on the market today utilize artificial feathers, rather than natural ones, we’ll only make notes when we come across one that uses a natural feather.

Almost every quill pen that you find on the market today is relatively affordable, so we’re sticking with the best-rated ones to differentiate from the ones that are cheaply crafted.

This quill pen is an affordable option and it is designed around a pheasant feather that is natural, rather than artificial. The nibs are stainless steel and the pen comes with five of them, each of varying size, from fine-tipped to broad.

The best part about the Showe is that the ink flow is surprisingly fluid, though a bit on the wet side, so there will be some level of concern for thinner papers or papers that have a relatively low coating level.

Cheap paper will also pick up a degree of feathering, which is a term that is unassociated with the actual feather on your quill. Feathering is when the ink from your quill pen penetrates the paper at a micro level, spreading out through the tiny parts much like blood flows through a vein.

This is a dip pen and the paper that comes with it is certainly not the most premium paper available out there, but it will hold the ink relatively well thanks to the thickness of the paper. It also comes with an aluminum cast pen holder, so you can show off your pheasant feather the way it’s been done for centuries.

Since it is a dip pen, you will have to have plenty of cloth around for wiping the nib after every dip, unless you enjoy splashing ink all over the paper as you try to write something on there that’s legible.

Also, being a dip pen, it requires a good deal of thorough cleaning after each use. The pen comes with a warning not to mess with the feather as it will bifurcate the feathers, sometimes in a permanent fashion. 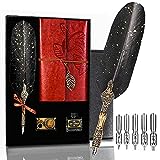 This artificial feather pen is one of the most highly rated feather quill pens on Amazon and it comes with the perfect package—since most quill pens come with a kit—including a journal that holds a hundred premium pages, a bottle of ink, and a unique nib replacement facilitator.

The replacement is done through the pen holder, which holds the new nib. When you are ready to replace the nib, remove the old one from the quill, and insert the pen into the holder. The new nib snaps into place and you simply remove the quill afterward.

The pen comes with five, stainless steel nibs, and the pen itself is constructed of stainless steel and brass. The pen is larger than the Showe and a little heavier in the hand. The feather is large enough and long enough to offset that somewhat, but it can create some cramping if you’re working for a long time.

Like the previous pen, this is a dip pen, so you will need to have some good cloth handy to keep it clean after each dip and to thoroughly clean it after each use. Even the gift box is very nice and worthy of a display area on your desk.

In terms of writing, this pen performs pretty well, especially with the 100 sheets of journal paper that come with it. Thinner paper brings out the issue of bleed-through, especially when you first dip the pen and start a new line.

The ink flow is quite smooth, however, and you won’t catch yourself backing up to hit missed sections where the ink didn’t lay down properly. 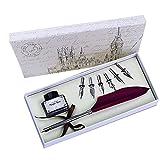 This is probably one of the prettier sets, in terms of display quality. The natural feather is a deep, brooding red that stands out against the white background of the display case. It comes with six different nibs arrayed in a fan-like fashion above the feather.

Each of the nibs has their own qualities and functions and are easily replaceable. The nibs are primarily used for artistic representations and calligraphy rather than just writing out words across a page.

It also comes with a 15ml bottle of ink. It’s not a huge bottle but it’s plenty enough to get you started. The nibs are constructed of stainless steel and when it comes to making marks on the page, the ink flows very well.

As a dip pen, thinner paper has a tendency to allow for a small degree of bleed-through, which isn’t as bad with this dip pen as it is in others. The pen itself is very stable and it feels great in your hand.

It’s clear that the packaging and feather choice was designed for maximum impact. The aesthetic comes off pretty well. Fortunately, this isn’t a pen that is all aesthetic and very little functionality. For the view and the price, this is a fun little quill pen. 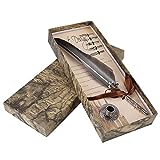 The stand-out quality of this dip pen is that it can write up to 30 characters without requiring another dip in the ink bottle. That’s because the Hilitand Quill Feather Pen is a bit more economical in how it is designed to deliver ink.

Fortunately, this doesn’t translate to a poor level of ink flow, as it flows relatively smoothly while writing, with the occasional bump. This pen comes with several accessories as well.

This is another natural feather and it is large enough that it brings a solid level of balance to the pen. It’s also—like the Opendgo—a deep and brooding red color that looks very striking whether it’s in use or nestled comfortably in its display case.

The pen is also sold with a midnight black feather, but the red is by far the most striking. The nib sizes are flat with 1mm, 2mm, 3mm, 4mm, 5mm, and 6mm replacement options available.

The six dip pen tweezers make it easy to transition from one nib to another without any additional fuss or mess to go along with it. While the ink flow shows only the occasional issue, it doesn’t write very well on cheap paper at all, with a decent amount of bleed-through and feathering.

In other words, make sure that you have some decent, quality paper with you when you first try it out. Since it’s a dip pen, it’s even more crucial to wipe it down well after each dip, especially if you are writing on low-gloss, cheap paper and you want to minimize the bleed-through and feathering.

Lastly, the pen nib base is simple but elaborately manufactured. It’s aluminum cast and pewter but does a fine job of holding your pen when not in use.

While quill pens are never going to return to their former days of unmitigated writing instrument supremacy, they’re still a novelty display item and some are even exceptionally functional. The quill pens on this list are great, all-around pens that do exactly what you are looking for.

Better yet, they operate much like a fountain pen and if you are familiar with fountain pens, you’re halfway there already.