If you have ever looked at bolt action pens, you might be wondering what the point is. Why would you purchase one of these pens when really, the simple twist or click mechanism works fine in most cases?

A bolt action pen has fewer moving parts than a click or twist mechanism and is therefore less likely to fall apart. The pens are easier to make, which may bring down the price point, and they can stand up to long-term use. You can engage them by hand, but they are less likely to get accidentally activated.

There are quite a few things that make bolt action pens popular, despite the fact that they are not significantly different from other kinds of pens – so let’s take a closer look at why you might want to buy a bolt action pen over one of the other options.

What Is The Point Of Bolt Action Pen?

Bolt action pens have enjoyed a recent surge in popularity, but given that they look much like other pens, you may be left wondering why so many people love them. After all, a pen is a pen in many ways. However, there are a few factors that make bolt action pens stand out from the crowd, including:

All of these pros make the bolt action pen particularly popular among people who like quality stationery and always want a reliable pen that they can grab at any moment and open in just seconds. The pens have thus become popular with office workers and hands-on workmen alike.

The pens work using an “L” shape mechanism and a bolt. The bolt is slid down the length of the L and into the short cross piece, which holds the nib of the pen in place until it is slid back. The nib cannot be accidentally pushed in, and the mechanism cannot slip; it must be consciously disengaged.

They Are Less Likely To Accidentally Retract

One of the major benefits of the L-lock mechanism is that it will not slip, resulting in the nib getting drawn back into the barrel of the pen. The nib cannot be pushed back inside until you slide the bolt back from the L, because the metal is physically held in place by the whole mechanism of the pen.

Compare this with the plastic twist or click mechanisms that are used in other pens, and you will immediately see that it is a better option. It will not suffer from the same level of wear and tear over the years, and it’s highly unlikely to wear out and result in slippage. This means that the nib will stay in place, even when the pen is getting much older.

They Are Less Likely To Accidentally Open

The L-lock mechanism is an advantage for the exact opposite reason too; it’s not really possible for one of these pens to have the nib engaged without deliberate action on the part of the user. This makes it a much nicer pen to put in a pocket or bag because there’s almost zero risk of the ink getting onto the fabric.

Many people comment that this is the biggest appeal of these pens to them; you can wear them around your neck on a lanyard, in a top pocket, or in a pants pocket and the nib won’t get engaged by mistake, no matter how you move or what you do. This makes bolt action pens much cleaner and reduces the risk of ruining your clothing.

They Can Operate As A Secondary Tool

A pen is usually just a pen, and there’s not very much more to them – but bolt action pens have become popular with many Everyday Carry (EDC) people because some of them can work as secondary tools.

Because the pen’s nib is held in place by a metal barrel, you can use the pen to break glass or as a weapon for self-defense. Once the nib is engaged, the pen will serve as a rudimentary tool for many situations, rather than just for writing. It may not be the ideal go-to option, but it is certainly better than nothing.

Most EDC people are on the lookout for tools that can serve a dual purpose, which has added to the popularity of bolt action pens. If you want to use your pen for a secondary purpose, look out for ones that are specifically marketed as such, because these may have been made with more robust materials to better withstand impact damage.

They Can Be Used As A Fidget Toy

A strange but major factor in the popularity of bolt action pens is the fun that they offer. If you have ever taken pleasure in clicking a pop pen in and out, you will love a bolt action pen. The bolt can be slid back and forth constantly to withdraw and engage the nib, and it’s a beautifully smooth and addictive action.

As well as being more enjoyable, there are two further advantages that the bolt action pen has over the standard click when used as a fidget toy. The first is that it is more durable, so it will hold up well to being handled in this way, and you’re less likely to end up with a broken pen in your hands.

The second is that you can slide the bolt in and out with very little noise if any. Instead of driving all your companions crazy with the clicking, you can engage your hands silently, which is highly appealing to many people.

If you struggle to focus in meetings and other formal scenarios, a bolt action pen is, therefore, an ideal fidget toy, because it’s unobtrusive and won’t look out of place in an office setting.

They Can Be Operated One-Handed

Some click and twist pens can be operated with just one hand, but bolt action pens are far easier to engage with one hand. You can simply slide the bolt down and it will slip across in the L with almost no effort, meaning you don’t need two hands to engage the nib.

You can therefore get your pen ready to write at any time, even if you are fumbling in your bag or holding your cell phone in your other hand.

In general, bolt action pens are made of metal, so they are sturdier than many plastic alternatives. You can count on one of these pens lasting well for years, even if you use it constantly.

What Is The Best Bolt Action Pen?

You can find decent bolt action pens on Amazon for less than $15. 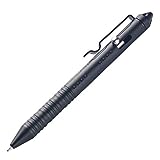 But my favorite brand of bolt action pen is Tactile Turn (the pen in this article’s pictures). Tactile Turn makes full metal machined pens that come with a lifetime guarantee. I watched an interview with the owner of Tactile Turn and their goal is to create pens that you can be passed down for generations. They are pricy pens, the titanium bolt action pen in the pictures is $100, but it is well worth the price.

Bolt action pens serve the same purpose as most other pens, but the engagement mechanism is considered superior for a whole range of reasons. If you love fiddling with your pen and you’re looking for a robust piece of kit that will stand up to rough treatment and won’t leak in your pocket, these are the perfect option.