Every document that the President of the United States signs his name on is of huge importance. These documents are often bills becoming laws, treaties between nations, or executive orders that will impact and influence the lives of millions of people – not just here at home, but around the world as well.

It should be no surprise that there’s a lot of attention paid to the pens that the President uses to sign these documents. Every president has the opportunity to choose their own “presidential pen”, but many presidents – at least since Ronald Reagan – have used pens from the AT Cross Company.

In the rest of this detailed guide we go over the different kinds of pens presidents have used throughout the years, touching on the importance of these pen choices, why they often use so many pens at signing ceremonies, and whether or not you can purchase the exact same pens the President uses, too.

What Pen Does the President Use?

Every American president since Ronald Reagan has chosen a pen from the Cross collection, with the lone exception being Pres. Bill Clinton decided to go away from a Cross pen and instead use Parker pens (pens he had been using since the beginning of his political career).

Ronald Reagan preferred the Classic Century ballpoint from Cross, a heavy and well-built ballpoint that almost overnight became a runaway bestseller. Pres. George HW Bush continued to use this pen when he became the President.

President Clinton, though, favored using the Parker Insignia – a vintage-style Parker pen that is no longer manufactured. This was also a ballpoint, black with gold trimming and a metal clip, a pen that Clinton had embossed with the presidential seal as well as his signature.

While these patents can’t be purchased directly from Parker any longer (the Insignia line has been discontinued for years), there are tons of these pens available on the secondary market.

They are (understandably) super popular with collectors but can be had without breaking the bank.

President George W Bush jumped back into the Cross collection, choosing a different pen than his father – instead going with the Townsend. This pen is significantly more substantial than both the Century and Century II pens from Cross, but share many of the same lines and aesthetics.

Interestingly enough, President George W. Bush also chose to move away from using black ink in his pens. He instead favored blue ink!

The Townsend (the same one that Pres. George W. Bush used, but this time with black ink) and the Century II “Tuxedo”, a modified version of the Century pen from Cross that Presidents Reagan and George HW Bush favored.

President Donald Trump originally started his administration using Century IIs that were identical to the ones that Pres. Obama had been using. In short order, though, Pres. Trump took to signing his official documents with a Sharpie that had been made specifically for the President.

President Joe Biden has elected to go with the Century II rollerball from Cross, keeping the tradition alive and well!

Why Does the President Sign with So Many Pens?

Presidents dating back to at least the days of John F. Kennedy have signed bills, legislations, and official documents with multiple pens.

The tradition began when President Kennedy wanted to make sure that everyone involved in passing core pieces of legislation or arranging for important treaties were recognized, handing them the pen immediately upon signing the document.

Some presidents sign multiple pieces of legislation multiple times, with Pres. Obama famously signing the “Obamacare” legislation with 22 individual pens – one for each letter in his name.

Many presidents keep collections of their pens in their presidential library, showcasing not only the most important pens in history that have signed critical government documents but also showing the kinds of pens they used on a day-to-day basis, too.

Can I Buy the Same Pens the President Uses?

In many cases, you are going to have an opportunity to get your hands on the exact same pens that the President uses.

The Cross company offers the exact same pens they make for the President of the United States available for sale to the general public, not just here in the United States but all over the world through the internet as well.

For example, the Cross Century and Century II pens can be purchased directly from the Cross website. These pens are available in both rollerball and fountain formats, but if you want to be sure that you’re writing with a “clone” of what the president uses you’ll want to stick to the rollerball versions of these pens. 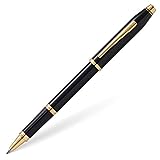 The Cross Townsend collection favored by Presidents William Clinton, George W. Bush, and Barack Obama can be purchased as well. These are also available in fountain and rollerball format, with rollerball the chosen option by each of these presidents.

At the end of the day, the pens chosen to mark very important pieces of legislation and critical documents in our nation’s history have been some of the most impeccably made and beautifully represented writing instruments ever produced.

The AT Cross company stretches all the way back to the 1840s, making it one of the oldest pen manufacturers not just in the country but in the world.

Founded in Rhode Island, the company has grown by leaps and bounds since those earliest days and officially became the “White House supplier of pens” in the late 1970s.

Gerald Ford favored these pens then, but it wasn’t until Ronald Reagan started using them religiously – and William Clinton established an official Cross/White House program – that these writing instruments became the cultural icon and permanent governmental fixture that they are right now.