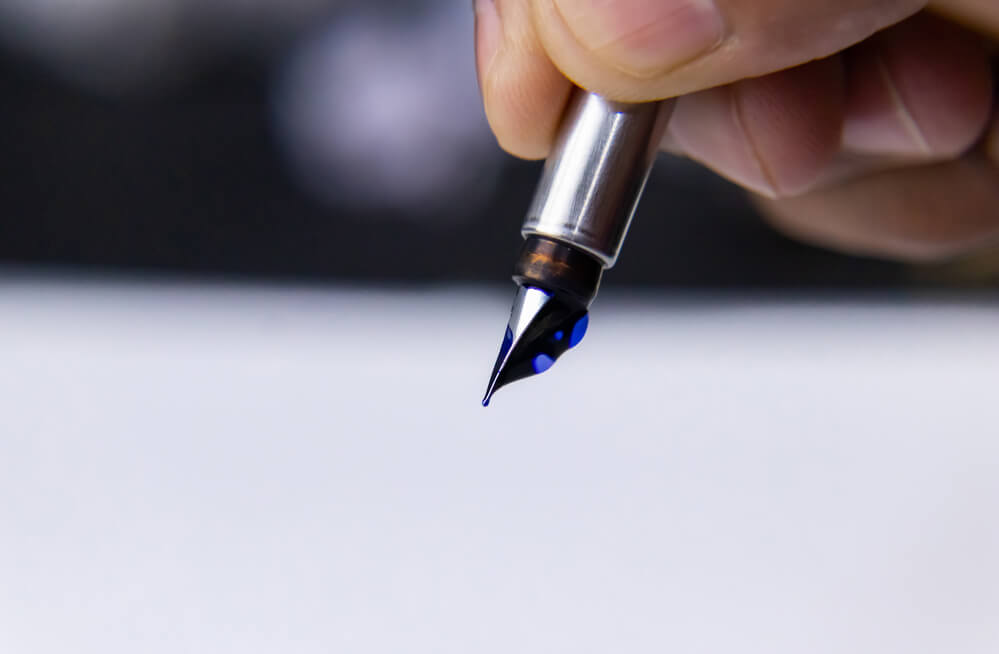 For some reason, many people who have never had the privilege of writing with a fountain pen and experienced its epic awesomeness of it, assume that the things just leak all over the place; a veritable fountain of unstoppable, desk-wrecking ink flow. However, fountain pens are well-designed tools that shouldn’t leak and if it does, something is wrong.

There are several reasons why your fountain pen may leak, including pull caps, the temperature of the storage location, how you store it, third-party ink cartridge use, overfilling the piston filler, and a damaged nib.

While all of these issues are either rare or controllable, they do happen and they’re the most common reasons behind leaking fountain pens. Fountain pens are not designed to leak but neither are they designed to perform like a ballpoint pen.

There are more moving parts on a fountain pen and it takes a degree of preventative maintenance that doesn’t apply to other pens.

If you pull the cap off of your fountain pen and end up having to go wash your hands before the ink sets into your skin, you’ve got a problem to solve and it could be any one of the issues listed above. With that being said, let’s cover some troubleshooting tips to get your fountain pen back in working order.

Beware of the Pull Cap

There’s nothing inherently wrong with a pull cap, however, the dynamics of removing it may surprise you because pulling the cap creates a degree of suction on the nib. This can effectively pull the ink out of the nib and before you have a chance to write with it, it’s already dripping wet.

The problem with this is that it is a frequent issue with entry-level fountain pens that are relatively low in cost. If the cap is indeed the problem, there is really nothing for it outside of getting a nicer pen.

If you stored it in your glove compartment like you would a ballpoint pen, you can expect to have some serious problems with the ink. Sometimes, it doesn’t even need to be that warm. It could just be your body temperature or a slightly warmer than normal room.

This isn’t the fountain pen’s fault. The fact is, it doesn’t matter if it’s an entry-level pen so much as it matters what the quality level of your ink is. If you purchased a generic brand, no-name ink, you can expect to have problems with the temperature causing leaks.

This is definitely a case of “getting what you pay for.” It’s important to find quality ink, such as Waterman, Noodlers, or Pelikan. It can make all of the difference in the world.

It’s highly advisable to always store your fountain pen so that the nib is facing up. While it’s not necessarily going to leak while it’s on its side, there is always a small amount of ink outside of the cartridge or piston that may find its way out with a little help from gravity.

If it’s an overnight thing then sure, it’s okay to keep the pen on its side. However, whenever it’s in your pocket or when it is going to be unused for an extended period, it needs to face up.

It’s not a certainty with your particular pen either. However, if you notice that you are having ink leaks after storing your pen on its side for a day or two, then that is probably the culprit, rather than some sort of defect in the pen.

Third-party ink cartridges can often be a problem as well and it rarely has anything to do with how cheap or expensive they are. It almost always boils down to the fact that third-party cartridges don’t mesh as well with fountain pens.

The problem is that they aren’t designed for that specific fountain pen. They may be considered compatible with your brand of fountain pen but ultimately, it doesn’t form the correct seal when it is inserted and being used.

The cartridge should sit snug and if you shale your pen so that you can hear it bouncing around in there, that’s a problem that needs to be addressed. It should be still and remain in place throughout the entirety of its use.

This doesn’t have anything to do with anything being defective, whether or not your fountain pen is entry-level, or what kind of ink and ink cartridges you are using. It has everything to do with the fact that sometimes, we all get a little overzealous when pulling ink into the piston filler.

There should be a clear indicator on the accompanying fountain pen manual that informs you as to what amount of ink your fountain pen will hold. If there isn’t, the fill level should be marked so that you can clearly see it as you fill it up.

Overfilling increases the pressure, much like water expanding within wood fibers, and that increased pressure is enough to push ink out and through the nib when the pen is not in use. It’s not a common mistake because it’s often difficult to overfill a fountain pen.

However, leave it to us fountain pen enthusiasts to get a little overenthusiastic and give it a go anyhow. You can always fill the piston halfway because it will not only last you a lot longer than you think, it will also let you know if that was what caused the leak to begin with.

There are a lot of reasons that could be behind a leaking fountain pen. However, it’s not the common thing that those who don’t use fountain pens think it is. The best way to stop a leak is to prevent it from happening to begin with. That means preventative maintenance and proper care every time.